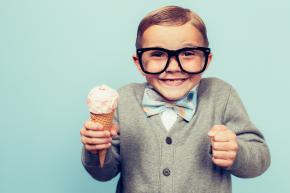 There is historical evidence that, in ancient times, ice was readily used to cool foods and drinks as a way of preservation or enhancing the ‘cool’ pleasure of consumption.
Although there are many myths, legends and obscure historical facts, it is logical to believe that ice – or snow – was also used as a cooling ingredient. It is claimed that the Roman emperor Nero (37-68 A.D.) loved a mixture of wine, honey and snow, ‘harvested’ in winter from the Apennine mountains and stored in ice cellars.
During history, it was also discovered that adding salt to ice makes it a perfect freezing technique to turn fruit juices and lemonades into ‘fruit ice’.

Dairy ingredients such as milk and cream made their entry into the iced recipes as late as in the seventeenth century, as illustrated in recipe booklets and culinary artefacts of that time. In that period, the name ‘cream ice’ was born to differentiate from the original non-dairy version. In the twentieth century, this term changed into the more commonly used ‘ice cream’.

The late seventeenth century is regarded as the starting date for ice cream’s European history and the existence during the eighteenth century of ice pails, special molds, serving cups and cookery books with ice cream recipes shows how ice cream had entered the dining culture of the elite.

Ice cream found its way into the eating habits of other social groups in the nineteenth century with the product being sold in coffee houses, restaurants and on the streets.
However, it was not until the invention of new freezing techniques and the mechanization of the ice cream industry that ice cream became an everyday commodity, with industrial production starting in Europe in the 1920’s.